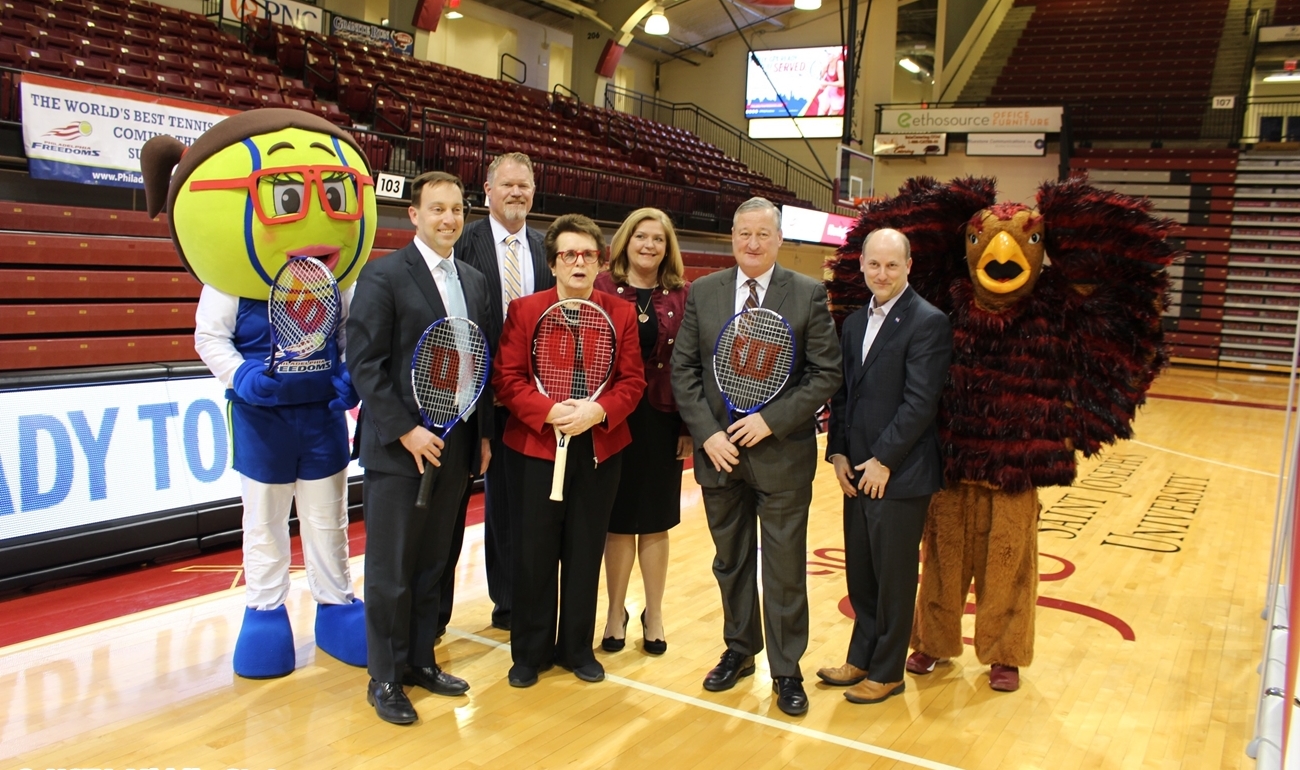 Saint Joseph’s University and the Philadelphia Freedoms of Mylan World TeamTennis (WTT) today announced a new partnership whereby the Freedoms will play all of their 2017 home games at the Michael J. Hagan Arena.

The Philadelphia Freedoms also announced that AmerisourceBergen will be the presenting sponsor of the Freedom’s 2017 Mylan WTT season. AmerisourceBergen is leader in driving innovative partnerships with global manufacturers, providers and pharmacies to improve product access and efficiency throughout the healthcare supply chain.

“For the first time since our inaugural season in 1974, the Philadelphia Freedoms will be playing in Philadelphia,” said Freedoms owner Billie Jean King.  “With the construction at Villanova, we wanted to bring the team’s home closer to Center City, and we are thrilled to play our 2017 home matches to Hagan Arena at Saint Joseph’s.  We look forward to welcoming our fans and creating new ones when we open our season this summer.”

“Hagan Arena is more than just a home court for the Hawks,” said Dr. Mark Reed, President, Saint Joseph’s University. “We’re positioning the arena as a multi-purpose convocation center with new and exciting opportunities for the surrounding region to visit our campus and enjoy some of the fantastic sites and sounds of the City Avenue District.”

The Freedoms began play in WTT’s inaugural 1974 season where they played their home matches at the Spectrum, the former home of the Philadelphia Flyers and 76ers. The centerpiece of the team was King, who served as player-coach. She became the first woman to coach a professional sports team that included male players.

Once King was signed with the Freedoms, her good friend Sir Elton John decided to write and record the song “Philadelphia Freedom” in her honor and for the team to use as an anthem. John was such a big fan of the Freedoms that he attended home matches wearing the team’s uniform and sat on the bench with the players.

The Freedoms will start to build their player lineup at the Marquee Draft next month, and will complete the team roster on March 14 at the Roster Player Draft in Indian Wells, Calif.

The 2017 season begins on July 16 and concludes with the championship finals on August 5. Schedule information will be released in March. Season tickets are currently on sale and are available by calling  Asher Halbert at 215-952-5219.